“The LHC is back,” the European Organization for Nuclear Research announced triumphantly Friday, as the world’s largest particle accelerator resumed operation more than a year after an electrical failure shut it down.
…
The collider has been dogged by problems. It made headlines early this month when a bird apparently dropped a “bit of baguette” into the accelerator, making the machine shut down.

The Large Hadron Collider, the world’s most powerful particle accelerator, just cannot catch a break. First, a coolant leak destroyed some of the magnets that guide the energy beam. Then LHC officials postponed the restart of the machine to add additional safety features. Now, a bird dropping a piece of bread on a section of the accelerator has, according to the Register, shut down the whole operation.

The bird dropped some bread on a section of outdoor machinery, eventually leading to significant over heating in parts of the accelerator. The LHC was not operational at the time of the incident, but the spike produced so much heat that had the beam been on, automatic failsafes would have shut down the machine.

That sounds like one serious design flaw if a bird with a baguette can shut down a 10 billion dollar machine.

Here’s a Black Friday reality check: Of the hordes of pre-dawn shoppers who line up for hours outside stores on the day after Thanksgiving, most will not bag the best bargains that appear in merchants’ circulars.

Look at the fine print that appears next to an advertised “doorbuster deal” at the bottom of the page in this year’s circulars.

It will either say “While supplies last,” “Minimum 2 per store,” “No rainchecks” or “All items are available in limited quantities.”
…
“C’mon guys. Give me a break,” said Dworsky. “How can you be the size of a retailer like Sears and only get a minimum of five per store, yet devote big space in your circular to advertise that deal?

This is a pretty sleazy practice and is bad business.  Is the ill will generated by not having adequate supplies worth the frenzy?

From ESPN.com: Agassi: Book part of atonement for lies

On Chang: “He thanks God — credits God — for the win, which offends me. That God should take sides in a tennis match, that God should side against me, that God should be in Chang’s box, feels ludicrous and insulting. I beat Chang and savor every blasphemous stroke.” When Chang wins the 1989 French Open, Agassi thinks, “I feel sickened. How could Chang, of all people, have won a slam before me?”

On “tanking”: Agassi says he lost on purpose against Chang in the Australian Open semifinals one year so he wouldn’t have to face Becker in the final, writing: “It’s almost harder than winning. You have to lose in such a way that the crowd can’t tell.” He also says of sports writers: “They never get it right. When I tank, they say I’m not good enough; when I’m not good enough, they say I tank.”

An early look at the Chevrolet Volt.  This car sounds intriguing.  Enough so to consider GM the next time I’m purchasing a car.

From CNN.com: Belgian PM is first ‘president of Europe’

As one Indian official said before the announcement: “If the EU chooses as its worldwide representative the prime minister of Belgium or Luxembourg I am not sure our leaders will have the time to meet him.”

If you ever feel like extruding some meat or caulking your tub, this device is for you. 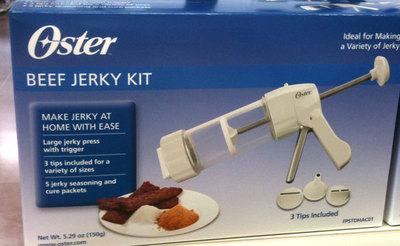 Being a fan of the artist Shepard Fairey, I’ve been slowly drawn to the urban art scene.  So, when I heard that Prefab77, a UK art collective was going to be exhibiting in Covington, I decided to take a look.  The exhibit opened last friday at a gallery, BLDG in Covington and runs until December 31st.

TimesOnline.co.uk: The Obama brothers meet up in Beijing

From TimesOnline.co.uk: The Obama brothers meet up in Beijing

Mr Ndesandjo seemed overwhelmed by the meeting. He told the Associated Press: “My big brother, you know I think he was on his way to see the President of China.

“He came directly off the plane, changed some clothes and then came down and saw us. And he just gave me a big hug. And it was so intense. I’m still over the moon on it. I am over the moon. And my wife… I think she is still recovering.”

This is somewhat old, but new to me. It’s hard to stay up with the awesomeness that is the internet.

Not only do you have to sell Windows, but you also have to dance and act happy doing it.