The company, Beef Products Inc., had been looking to expand into the hamburger business with a product made from beef that included fatty trimmings the industry once relegated to pet food and cooking oil. The trimmings were particularly susceptible to contamination, but a study commissioned by the company showed that the ammonia process would kill E. coli as well as salmonella.
…
With the U.S.D.A.’s stamp of approval, the company’s processed beef has become a mainstay in America’s hamburgers. McDonald’s, Burger King and other fast-food giants use it as a component in ground beef, as do grocery chains. The federal school lunch program used an estimated 5.5 million pounds of the processed beef last year alone.

Using ammonia in beef sounds bad enough, but the article goes on to say that it might not be as effective as the FDA thought it might be.  I’m beginning to wonder if you can ever trust what is in ground beef.

Photo- How to Draw Hell Beasts 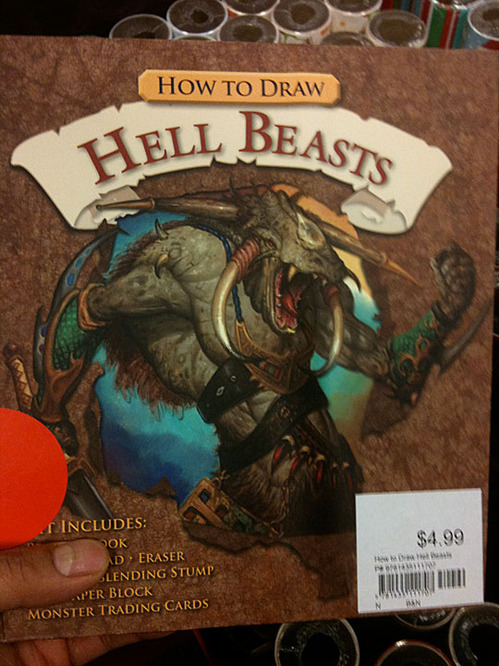 I actually kind of regret not picking this up at the 50% off bin at Barnes and Noble.  I mean, who doesn’t want to learn how to draw Hell Beasts?!
December 28, 2009 by morris
Uncategorized 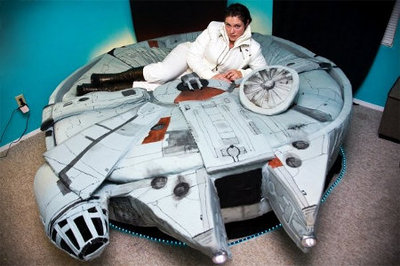 Coolest bed ever!  You could make your own from this IKEA bed, but it looks like it’s been discountinued. 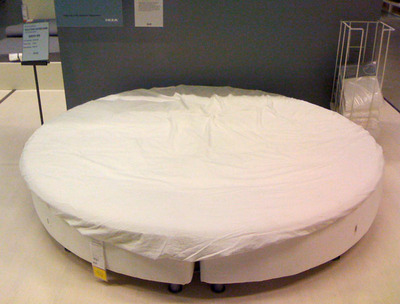 When is a restaurant reservation not a reservation?  When you have one for 9:00pm and don’t get seated until 10:00pm.
The guilty party? Otto’s on Mainstrasse in Covington on Saturday night.
I understand that you can’t always predict when customers will leave, but an hour?  And we weren’t the only ones.  Another four people ended up eating at the bar because of the wait.  We couldn’t eat at the bar because the three of us had one stool between us.  What we thought was going to be a few minutes became twenty minutes, then an hour.  Leaving was always an option, but we really had no idea that we’d have to wait so long.  It’s hard to leave when you think your table is just around the corner.
The worst part is that they never offered us a drink, an appetizer, nor even a word of apology.  Some kind of gesture would have a long way.
I like Otto’s, but it’ll be a while before I go back.
December 14, 2009 by morris
Uncategorized

From NYTimes.com: For Judges on Facebook, Friendship Has Limits

Judges and lawyers in Florida can no longer be Facebook friends.

In a recent opinion, the state’s Judicial Ethics Advisory Committee decided it was time to set limits on judicial behavior online. When judges “friend” lawyers who may appear before them, the committee said, it creates the appearance of a conflict of interest, since it “reasonably conveys to others the impression that these lawyer ‘friends’ are in a special position to influence the judge.”

I’ve been struggling with the definition of what is a friend on Facebook and now I have a mishmash of friends, acquaintances, and a few people I don’t really know.  On a “friendly” day I might let someone in my circle that I otherwise wouldn’t.  But, anyone who looks at my profile doesn’t really know the difference.  It’s just a number and a connection.

Palin’s Father: She Left Hawaii Because Asians Made Her Uncomfortable

From HuffingtonPost.com: Palin’s Father: She Left Hawaii Because Asians Made Her Uncomfortable

According to him, the presence of so many Asians and Pacific Islanders made her uncomfortable: “They were a minority type thing and it wasn’t glamorous, so she came home.

Wow, the feeling is mutual.  I have this strong uncomfortable feeling about Sarah Palin.

WSJ.com article Get a Grip on Physics- Book in Tiger’s SUV

From WSJ.com: How to Boost Book Sales? For “Get a Grip on Physics,” Tiger Woods’ Crash Helped

The book, a layman’s guide to physics by British science writer John Gribbin, appeared in a photo of Woods’ crashed SUV, lying on the vehicle’s floor. Since yesterday, the book’s Amazon sales rank has jumped from 396,224 to 2,268 — a fortuitous turn for the author. “Anytime a book gets highlighted, you get a spike of a day or two,” Jim Milliot, a senior editor at Publishers Weekly, said. “It happened when President Bush was carrying some books on vacation. It happened with Obama.” Asked if there was an industry term for such a notoriety-induced sales boost, Milliot replied, “dumb luck.” 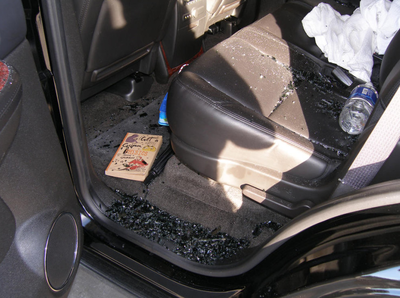 I guess it’s just human nature.  When I saw the book in this photo, I immediately went to Amazon to look it up too.
December 6, 2009 by morris
Uncategorized

Innovative illustrator Shepard Fairey has been selected to create the official artwork for the 52nd Annual GRAMMY Awards. The piece, which brings together traditional GRAMMY iconography with Fairey’s unique approach to design, will be used as the official artwork for the world’s premier music event and will grace the cover of the 52nd Annual GRAMMY Awards program book, telecast tickets, promotional poster, and 2010 GRAMMY Nominees CD.

This is pretty cool.  Can’t wait to see what he comes up with.  The Contemporary Arts Center in Cincinnati will be exhibiting Shepard Fairey’s work in February 2010.

Shepard Fairey: Supply and Demand
Guest curated by Pedro H. Alonzo in consultation with the artist, and developed by ICA/Boston
February 20-August, 2010