Sovereign governments such as the United States can print new money. However, there’s a statutory limit to the amount of paper currency that can be in circulation at any one time.

Ironically, there’s no similar limit on the amount of coinage. A little-known statute gives the secretary of the Treasury the authority to issue platinum coins in any denomination. So some commentators have suggested that the Treasury create two $1 trillion coins, deposit them in its account in the Federal Reserve and write checks on the proceeds.

Not a serious solution, but an interesting idea.  Can you imagine holding a $1 trillion coin?

I’ve been using Mac OS X Lion since last week and I like it, but there are some things that have changed that bug me.  One was the animation when sending or responding to mail.  Here’s a way of disabling it using Terminal. 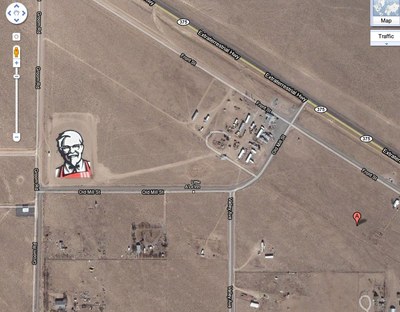 You really can see the Colonel in Google Map of Rachel, Nevada.  Just zoom in.

CriticalMiss.com: The Campaign For Real Monopoly

CriticalMiss.com: The Campaign For Real Monopoly via Kottke.org 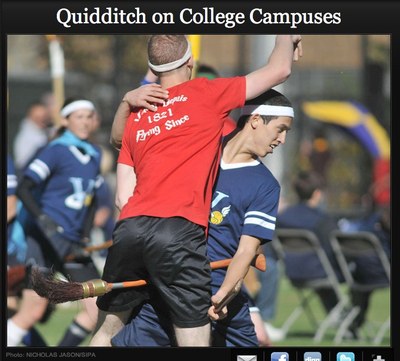 There’s something seriously wrong with this picture.

Fascinating interview with Steve Jobs from 1987.  In it you can see the seeds of success that Apple is today.  You can sense the conflict within Apple in

His description of the creation of the Macintosh pretty much describes the Apple Way.

Let me compare it with IBM. How come the Mac group produced Mac and the people at IBM produced the PCjr? We think the Mac will sell zillions, but we didn’t build the Mac for anybody else. We built it for ourselves. We were the group of people who were going to judge whether it was great or not. We weren’t going to go out and do market research. We just wanted to build the best thing we could build. When you’re a carpenter making a beautiful chest of drawers, you’re not going to use a piece of plywood on the back, even though it faces the wall and nobody will ever see it. You’ll know it’s there, so you’re going to use a beautiful piece of wood on the back. For you to sleep well at night, the aesthetic, the quality, has to be carried all the way through.

His description of why people will buy computers for the home in the future:

SJ: The most compelling reason for most people to buy a computer for the home will be to link it to a nationwide communications network. We’re just in the beginning stages of what will be a truly remarkable breakthrough for most people–as remarkable as the telephone.

PB: Specifically what kind of breakthrough are you talking about?

SJ: I can only begin to speculate. We see that a lot in our industry: You don’t know exactly what’s going to result, but you know it’s something very big and very good. 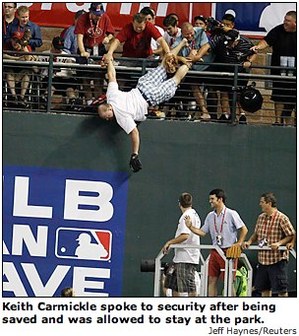 Chasing a home run hit by Milwaukee’s Prince Fielder, Carmickle was saved from a long fall when his brother and a friend grabbed him around the legs and arms, then pulled him back as he dangled above the deck area behind the pool in right field at Chase Field.
…
Trying to snare a towering shot by Fielder, Carmickle stepped up onto a metal table about 18 inches wide and reached down to catch the ball. It hit a wall several feet below Carmickle. His momentum carried him forward, headfirst over a short railing at the back of the table.

Some people really don’t learn lessons well.  There’s been talk about making stadiums safer, but there’s really nothing you can do to eliminate stupidity.

UPDATE: From SFGATE.com, here’s a picture of the dumbass, Keith Carmickle standing on the table waiting to catch a home run ball. 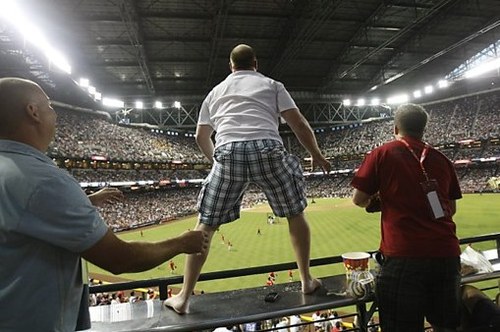 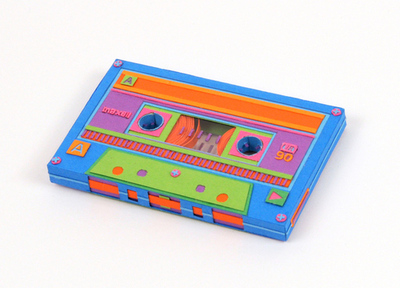 Trek in the Park (Portland) 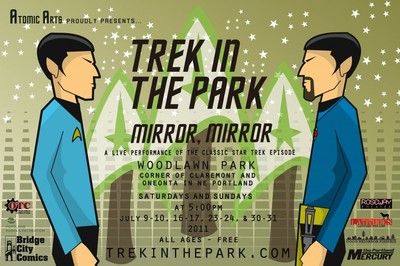 Unfortunately this is in Portland or I’d definitely go see it.  It’s a live performance of the classic Star Trek episode Mirror, Mirror.
July 8, 2011 by morris
Uncategorized