McCain looks like he just got a new toy for his birthday!   Sarah Palin popping out of a box with her “Miss Alaska” wave!

I guess even the NYTimes found the above picture of McCain “vetting” his new running mate a little wrong, substituting the picture below on the webpage.

Senator John McCain chose Gov. Sarah Palin of Alaska as his running mate on Friday, shaking up the political world with a surprise pick at a time when his campaign has been trying to attract women, especially disaffected supporters of Senator Hillary Rodham Clinton.

I think Hillary loves being the “first woman” in U.S. politics, the woman who breaks ground for women and will do everything in her power to prevent Sarah Palin to become the first female Vice President.  I think Obama will be willing to share the campaign stage with her if that neutralizes Palin. 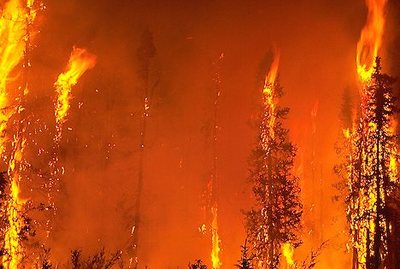 Here’s a picture of the candles on John McCain’s birthday cake.

Polar Bear swimming to the Arctic

Federal observers flying for a whale survey on Aug. 16 spotted nine polar bears swimming in open ocean in the Chukchi. The bears were 15 to 65 miles off the Alaska shore. Some were swimming north, apparently trying to reach the polar ice edge, which on that day was 400 miles away.

Polar bears are powerful swimmers and have been recorded on swims of 100 miles, but the ordeal can leave them exhausted and susceptible to drowning.

This is pretty sad.  I’m afraid that this is something we’re going to see more and more of as the effects of global warming become more pronounced.

Thanks to Karin for letting me know about this.

From CNN.com: Will ‘green’ movement kill the meal tray?

Glenville State has joined an increasing number of colleges and universities that have shed their cafeteria trays.

In drought-stricken Georgia and North Carolina, the goal is to conserve water by lightening the load on dishwashers. Other schools are trying to cut down on wasted food and conserve energy. Proponents, including major food vendors, say it also reduces the use of water-polluting detergents.

I can’t imagine going to a college cafeteria and not having a tray to carry the food and drinks to the table.  Yes, it might save water and cause college kids to eat a little less, but do the benefits really outweigh the inconvenience?  I think you’d save a lot more water if you were able to keep students from taking 30 minute showers.

It’s good to be Michael Phelps

From SI.com: Did You See That? 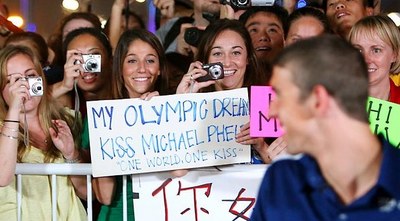 Warren Sapp is going to be on this season’s Dancing with the Stars.  Sapp was one of the quickest “big guys” I’ve ever seen.  He had an amazing ability to chase down quarterbacks from the Defensive Tackle position.  It’ll be interesting to see how those quick feet translates to dancing.

Players were told by LPGA commissioner Carolyn Bivens that by the end of 2009, all players who have been on the tour for two years must pass an oral evaluation of their English skills or face a membership suspension. A written explanation of the policy was not given to players, according to the report.

Betsy Clark, the LPGA’s vice president of professional development, said a team of evaluators will assess players on communication skills including conversation, everyday survival phrases and “golfspeak.” Players must be able to conduct interviews and give acceptance speeches without the help of a translator, she said, according to the report.

This seems to be an over-reaction by the LPGA towards the large number of foreign players, especially Asians.

I would like to think that it’s not meant to be discriminatory.  It is in the best interest of players to be able to speak English.  It makes playing with partners easier and it’s good for players to be able to market themselves and women’s golf.  But, I have read where people don’t believe that having an influx of Asian golfers is good for the women’s game because they aren’t connecting with the crowds.

So, is it right to mandate English?  What if the French Open in tennis made all tennis players speak French?  Or the Olympics in Beijing required everyone to speak Mandarin to the media?  Neither the  NBA or MLB requires English with their huge numbers of foreign players and they seem to be doing fine.

UPDATE 8/27/08:
From Golf.com: LPGA’s English-only policy is unsportsmanlike and un-American

The world of sport is supposed to be a true meritocracy. You should be measured by your skill, not your personality or parents or linguistic prowess. If Seve Ballesteros was subject to a rule like this one, he never would have won the 1980 Masters. The LPGA wants to hold its members to a different standard, one that makes proficiency in English and the ability to entertain pro-am sponsors as important as proficiency with a 7-iron.

Premier Exhibitions (PRXI) says Bruce Eskowitz, who served as President and CEO and as a Director, and Brian Wainger, who served as Vice President, Chief Legal Counsel and Corporate Secretary, have resigned. In addition, James Yaffe and Jonathan Miller have resigned as members of the Board of Directors. CFO Harold “Bud” Ingalls was elected to the Board of Directors. PRXI also announces that will restructure its marketing program and plans to outsource much of its marketing efforts.