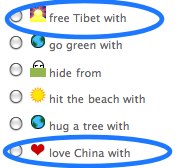 SuperPoke on Facebook stays China “neutral” by giving you a choice of “poking” by freeing Tibet or loving China.

I’m just waiting for my “love Taiwan with”.

From WashingtonPost.com: When the Cat’s Away, Neurosis Is on Display

One of Walsh’s occasional readers is Davis, who heard about the site a few months ago. The cartoonist calls the work “an inspired thing to do” and wishes to thank Walsh for enabling him to see another side of “Garfield.”

Garfield Minus Garfield is one of my favorite daily reads!

The Truth About the Spinning Dancer

This image has been a source of amusement in my office for the last couple of days. If you look at the image, you can sometimes see the dancer change the direction of her
rotation.  But it’s not an indicator of Right/Left Brain dominance as some people have said (read the article below).

Everyone in my office could see it change except for my sister.  She probably would have thought it was a prank if it weren’t my mom exclaiming every time it changed direction for her.  My sister was convinced that it only rotated clockwise until she saw it change about 10 minutes later.

From NYTimes.com: The Truth About the Spinning Dancer

But while the dancer does indeed reflect the brain savvy of its creator, Japanese Web designer Nobuyuki Kayahara, it is not a brain test. Instead, it is simply an optical illusion called a reversible, or ambiguous, image. Images like this one have been long studied by scientists to learn more about how vision works.

Sometimes, a person will stare at an image and it will never reverse. Dr. Toppino advises staring at one part of the image, such as the foot, and most of the time it will eventually flip. I tried this several times, but it never flipped. Dr. Toppino says in people who can’t see the reversal, it may be that one underlying neural structure is more dominant, but once someone finally manages to see the flip, it will start to happen more often.

From the TimesOnline: Man stabbed while waiting to buy Grand Theft Auto IV

By 11pm, about a hundred people had gathered at Gamestation in Croydon, South London, when a 23-year-old man standing in the queue was stabbed several times by a passer-by.

Later, an 18-year-old man was mugged in Leyland, Lancashire, soon after buying a copy of the game for Â£40. Two robbers punched the victim to the ground and then kicked him, shattering his nose and jaw, according to the Manchester Evening News. They snatched the game before running away.

Getting caught up in crime while waiting to buy a game where you commit crimes.  Interesting.

The NYTimes.com has a pretty rave review of this game.  And lots of advertising.  Though, I’m not exactly sure what they’re advertising in the ad below.
It looks like crime does pay. 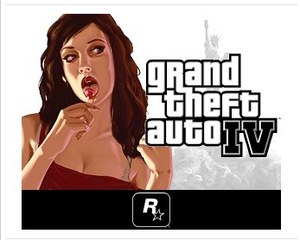 I’ve grown up playing video games, but I’ve never played any of this series.  Not really a fan of crime, but the high level of interactivity intrigues me. 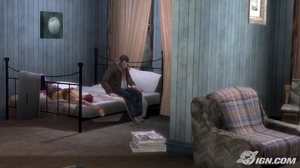 However, the level of interactivity in this picture is probably a little more than you need.

I found this NBC promo for the original Star Trek on YouTube.  It’s Star Trek in Color!  We’ll be looking back at HD the same way some time in the future.

“One day they will be worth something.”

From NYTimes.com: “Give Peace A Chance” Lyrics Up For Sale

The lyrics are being sold by comedy writer and presenter Gail Renard, who was 16 when Lennon and Yoko Ono staged their famous “Bed-In” at a hotel in Montreal in 1969.

Renard and a friend sneaked into the Queen Elizabeth Hotel where the recently married Lennon and Ono were holding a protest for peace and became friendly with the couple.

According to Christie’s, Lennon gave Renard some mementos, including the lyrics, telling her: “One day they will be worth something.”

I think I’d have a hard time selling something like this if I got it the same way she did.

I took some pictures this weekend with my iPhone.

The first picture is of my next door neighbor’s tree.  It was spectacular, but I didn’t have my SLR to take the picture so I whipped out the iPhone.  It’s actually a pretty nice picture with only a little color correction and sharpening with Photoshop. 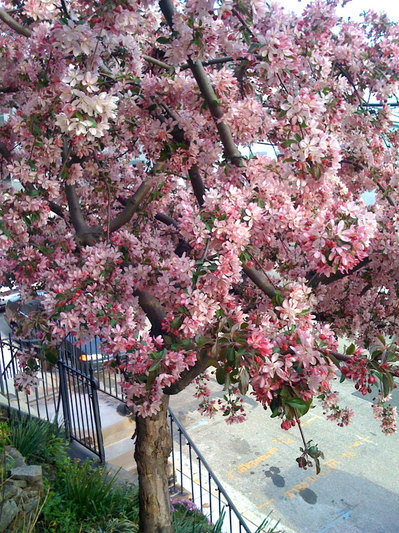 The next two photos are of the flower carpet that was on Fountain Square.  It was actually in the evening around 9:00PM.  The iPhone actually does pretty well in lowlight situations, but only when there isn’t any movement.  I took a little blue tint out with Photoshop, but should have done a little bit more with it. 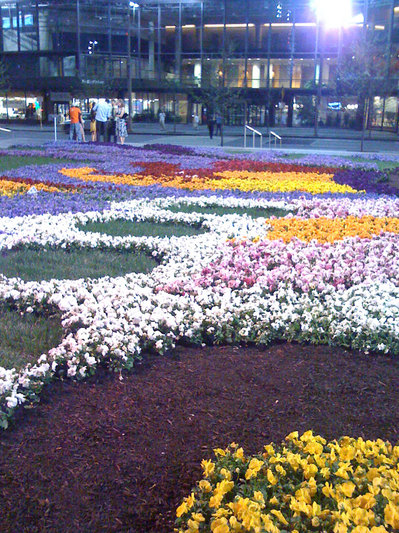 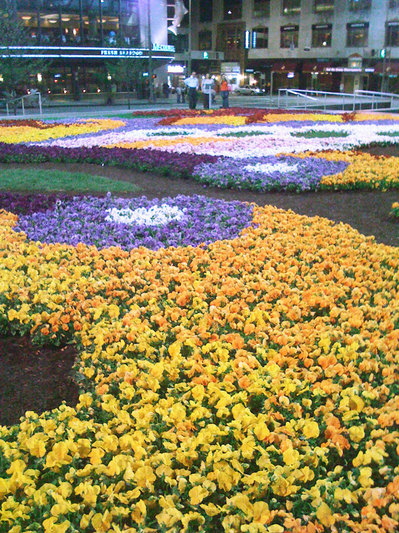 The media was fascinated because shark attacks are sickeningly grisly and cosmically rare. Your chances of being killed by a shark in any given year are about 1 in 280 million, according to the Harvard Center for Risk Analysis. Your chances of dying in a car accident are about 1 in 6,700. In other words, you would have to swim in the ocean 41,000 times a year (or 112 times a day, or seven times every waking hour) before swimming in shark habitats became as dangerous as driving your car a single time. As my colleague Amanda Ripley points out in her forthcoming book The Unthinkable: Who Survives When Disaster Strikes — and Why, humans are kicking ass in the shark-human war: we kill at least 26 million of them every year, and they kill about six of us.

Humans are a far greater threat to sharks than they are to us.  But, thanks to movies and the Discover Channel, we can all close our eyes and imagine what it might be like to get attacked by a shark!

Here’s Nicki Clyne’s reaction on her blog to the death of her character Cally on Battlestar Galactica. (Link is now dead- Nicki Clyne is redesiging her website)

“I’m very proud that, as of today, I have received more votes by the people who have voted than anybody else,” Mrs. Clinton said on Wednesday in a campaign appearance in Indianapolis. “It’s a very close race, but if you count — as I count — the 2.3 million people who voted in Michigan and Florida, then we are going to build on that.”

Repeat after me.  All the candidates agreed that these states wouldn’t count.  But now in Hillary’s desperation, she wants these states counted.  How can Michigan possibly count if Hillary’s the only one on the ballot?

She is politics at its worst.