From CNN.com: Bush: We’re in a slowdown

The president also repeated his objection to sitting down with leaders of countries such as Iran and Cuba, nations accused of abusing human rights and stifling democracy.

The move has been an issue between Democratic presidential hopefuls Hillary Clinton and Barack Obama.

“It is extremely counterproductive, sends chilling messages to our allies. … It would be a mistake,” Bush said. “Having your picture taken with someone like Raul (Castro) lends the status of our country to him.” Castro, brother of Fidel, is the new president of Cuba.

Bush said he intends to meet with China’s president during a trip to Beijing to see the summer Olympic Games, which begin in August.

The Bush administration has accused China, a major U.S. trade partner, of human rights abuses. Bush didn’t elaborate on what issues he might bring up.

Hmmm.  Abusing human rights and stifling democracy.  China? Check and check!  And we’re going to meet the President of China during the Olympics?  I’m not saying that I disagree with Bush about talking to China, that’s how problems get resolved.  Foreign policy should be about dialog- even with people we don’t like.

Kimmel and his writers, rested from being on strike, show their rejuvenated creativity by hauling out 25-year-old flaming fag stereotypes. They know a couple of certifiably straight stars pretending to be big queens will have them rolling in the aisles. So, they open with Kimmel and Affleck in an open-air bar populated by a shirtless West Hollywood harem. They stand at a bar with a blender and glass of what looks like a strawberry daiquiri, and on the bar sits a large bowl of fruit. Get it? Fruit. Get it? They’re FRUITS. Get it?

Next up, let’s see Jimmy to do a video where he’s f**king a famous negro, running around with chitlins, watermelons and a spear, while tap dancing and singing “Shortnin’ Bread.” Let the hilarity begin!

I’ll have to admit that I found the video to be funny.  But, I realize that most of the humor is in watching two straight actors pretending to be gay by being stereotypically gay.  Should humor come at the expense of a minority group?  If it was about African Americans as described in the last paragraph, would it be funny?

From NYTimes.com: Never Too Young for That First Pedicure 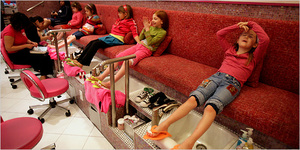 But today, cosmetic companies and retailers increasingly aim their sophisticated products and service packages squarely at 6- to 9-year-olds, who are being transformed into savvy beauty consumers before they’re out of elementary school.

There’s something seriously wrong with placing such importance in beauty and fashion with 6-9 year olds.  There are more important lessons to be learned in life than this.

Garfield Minus Garfield is an example of when “less is more”. Â This is pure genius.

This is an actual John McCain banner ad that links back to John McCain’s official site.  It’s one of the worst looking animated ads that I’ve ever seen. 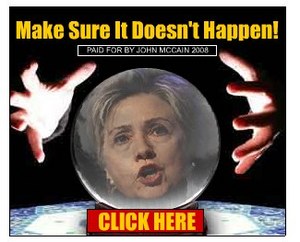 Senator McCain may not be aware, but in this day and age there’s a profession out there called “graphic design”.
February 27, 2008 by morris
Uncategorized

Look who I found on Match.com- Sasha Cohen the Olympic figure skater!  Skating can be a lonely life on the road and where better than Match.com to find your potential mate?

I can see Sasha and I together skating in the park, laughing and holding hands.  But my dreams of love were quickly shattered when I realized this was yet another Match.com spam profile.  Why, Match.com, why?

Cunningham said later that he stood by his comments. He told his listeners: ‘”I’ve had it with McCain. I’m going to throw my support to Hillary Rodham Clinton.”

Cunningham represents the worst in fear mongering politics.  Playing on racial fears and divisive stereotypes to advance his own agenda. He’s says he’s the voice of the common man, but he isn’t.  He’s the voice of the pompous, self-promoting, ratings grabbing Bill Cunningham.  Why anyone gives this a clown a platform to spout his hate speech is beyond comprehension.  Watching the video, I’m reminded of the dumb and loud school yard bully, resorting to name calling when you have nothing intelligent or witty to say.

Bill Cunningham is a total embarrassment to Cincinnati.  Thanks for getting Cincinnati into the news again, Bill.

Cunningham said McCain “ought to attack Democrats and quit attacking conservatives like me.”

“I, for one, regret that John McCain is the nominee of the conservative party,” he said.

Hmmm. Isn’t it possible that McCain isn’t actually attacking conservatives, but Bill Cunningham’s idiocy?  Of course Bill Cunningham isn’t capable of comprehending that he isn’t the totality of the Conservative wing of the Republican Party.

McCain said Monday that to win the White House he must convince a war-weary country that U.S. policy in Iraq is succeeding. If he can’t, “then I lose. I lose,” the Republican said.
He quickly backed off that remark.

“Let me not put it that stark,” McCain told reporters on his campaign bus. “Let me just put it this way: Americans will judge my candidacy first and foremost on how they believe I can lead the country both from our economy and for national security. Obviously, Iraq will play a role in their judgment of my ability to handle national security.”

“If I may, I’d like to retract ‘I’ll lose.’ But I don’t think there’s any doubt that how they judge Iraq will have a direct relation to their judgment of me, my support of the surge,” McCain added. “Clearly, I am tied to it to a large degree.”

McCain states his experience as his prime qualification for being President, but his strong support of the Iraq war calls into question his judgment.  Fighting a war in Iraq has not helped our national security and diverting troops from Afghanistan has actually set us back in capturing those who have started this war on terror.  How someone who supports Bush’s policies and claims to be a superior candidate for national security is beyond me.

From Apple.com: iTunes Now Number Two Music Retailer in the US

CUPERTINO, California–February 26, 2008–AppleÂ® today announced that iTunesÂ® (www.itunes.com) is now the number two music retailer in the US, behind only Wal-Mart, based on the latest data from the NPD Group*. Apple also announced that there are now over 50 million iTunes Store customers. iTunes has sold over four billion songs, with an incredible 20 million songs sold on Christmas Day 2007 alone, and offers the world’s largest music catalog of over six million songs from all of the major and thousands of independent labels.

iTunes is successful because it’s convenient, cheap, and easy to use.  It’s instant gratification at its finest.