We’ve been on the move since Bangkok, touring the coast of Thailand all the way down to Penang, Malaysia. Internet has been pretty spotty at the places we’ve stayed. It’s easy enough to catch a WIFI network here and there for checking email, but not enough for a longer blog entry.

We’re spending New Year’s Day in Hua Hin, a beach city relatively close to Bangkok. This is a popular beach destination for those in Bangkok- the King of Thailand has a beach house here.

We watched New Year’s Eve celebrations from the 9th floor balcony of a condo that we’re staying at. Floating lanterns filled the sky flying out towards the ocean. A floating lantern is like an upside down paper bag with an oil candle at the bottom. The heat from the candle causes the lantern to rise like a hot air balloon.

The red streaks in this photo are the lanterns in the sky. Photos can’t really capture the beauty of the river of red dots moving through the sky. 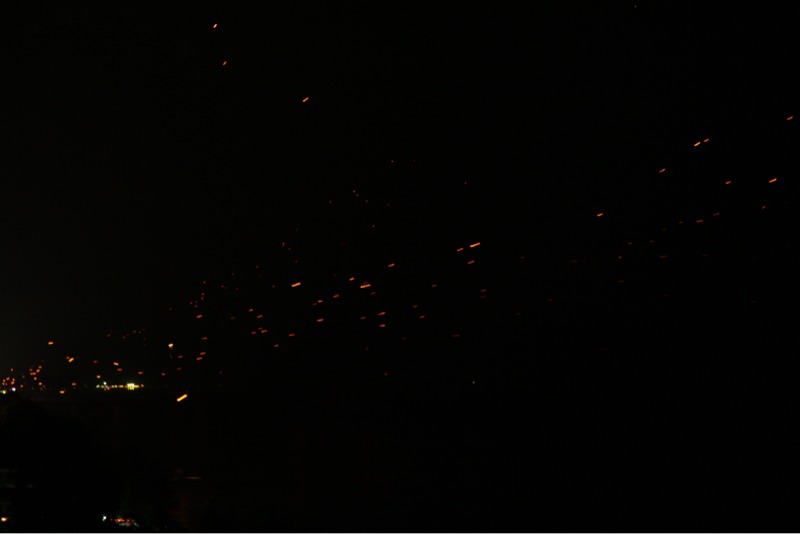 Over the city fireworks lit the sky bringing in the New Year. 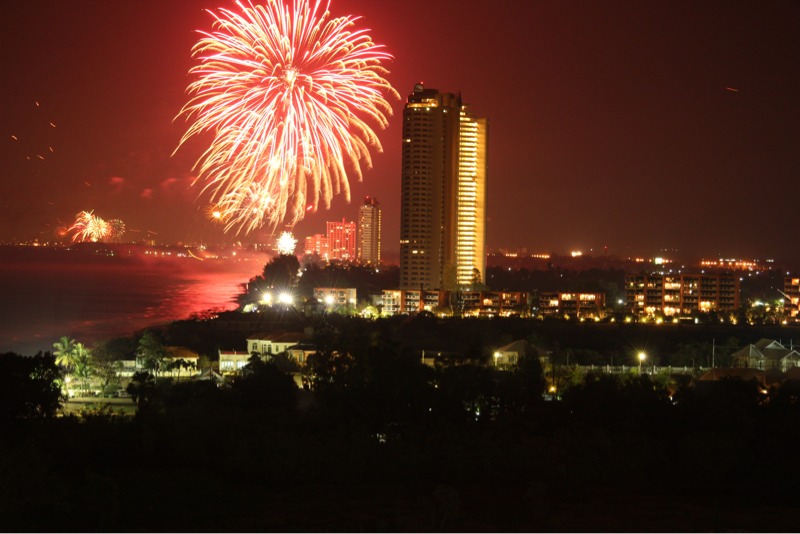 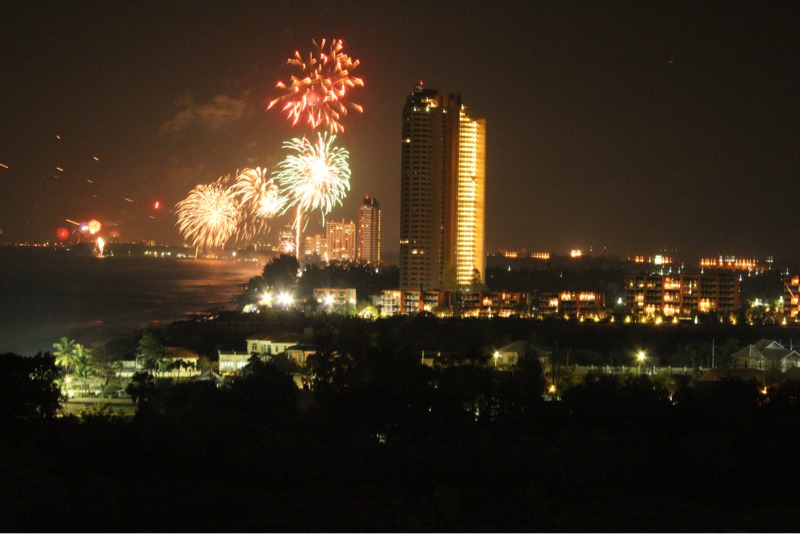 I shot the fireworks photos with my Canon T2i pressed onto the balcony with an exposure time of 8 seconds. I think they turned out pretty well! 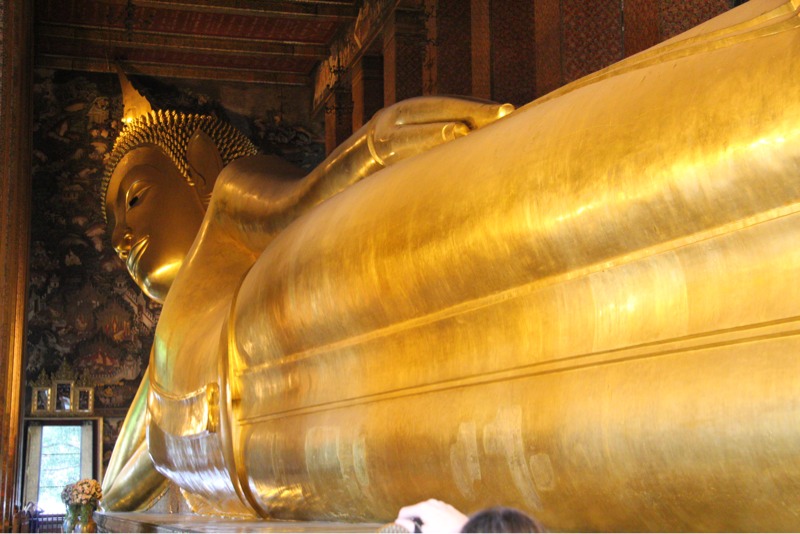 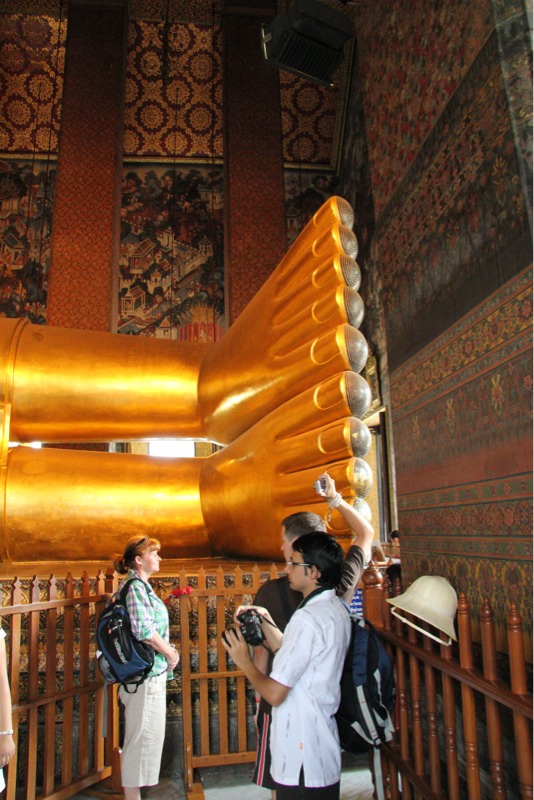 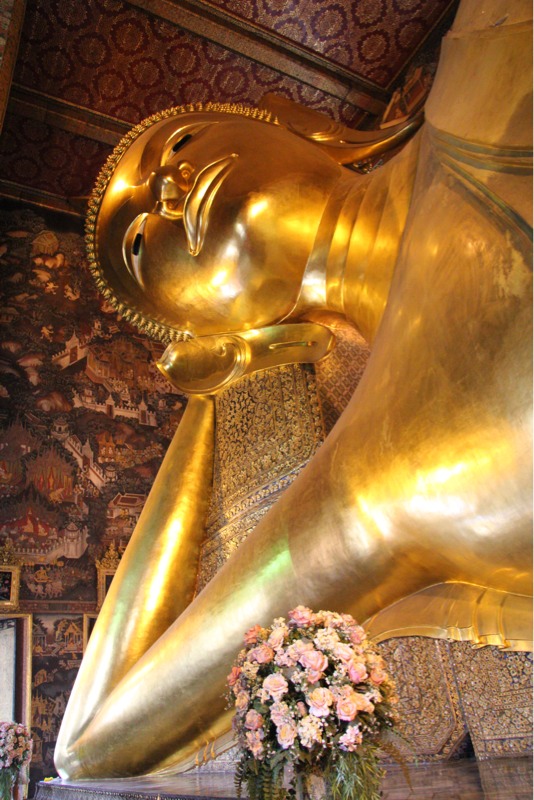 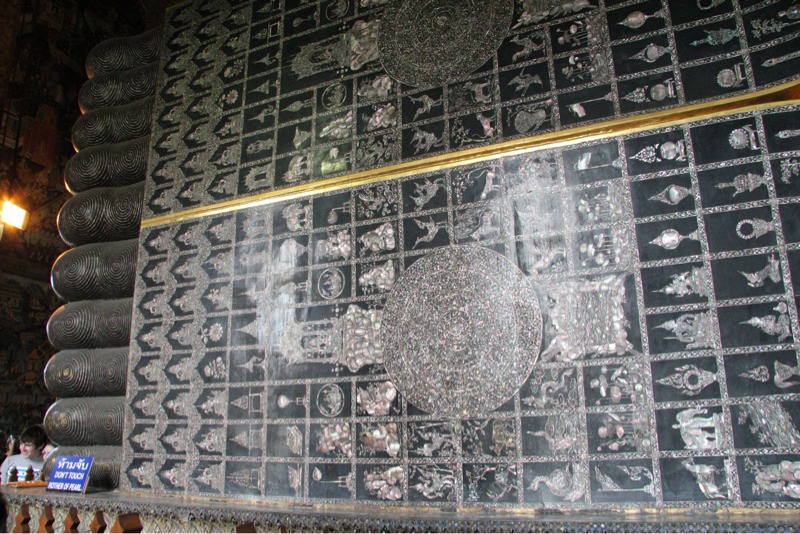 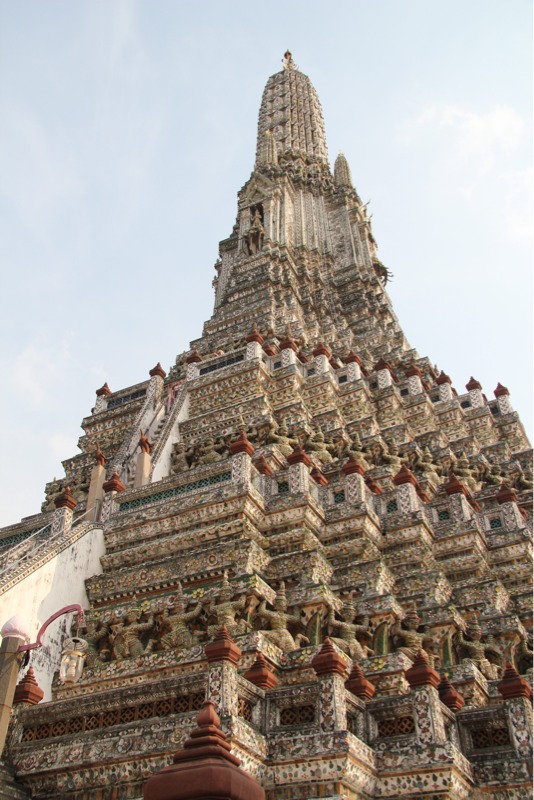 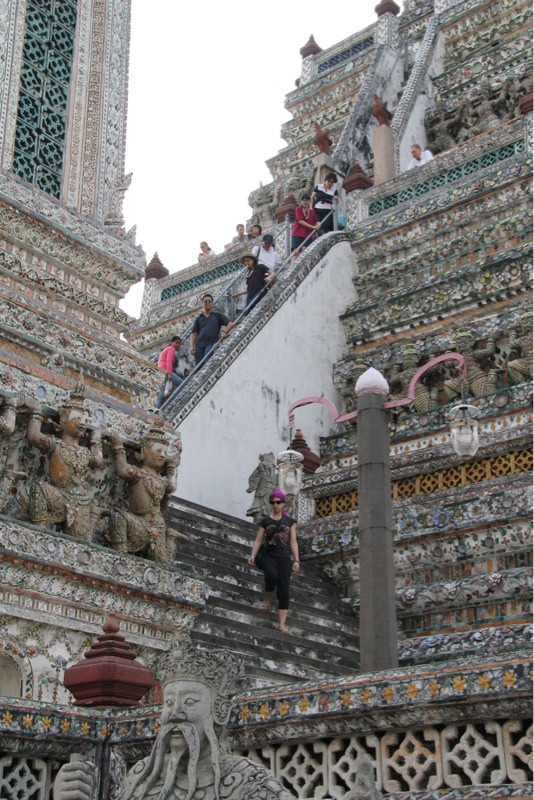 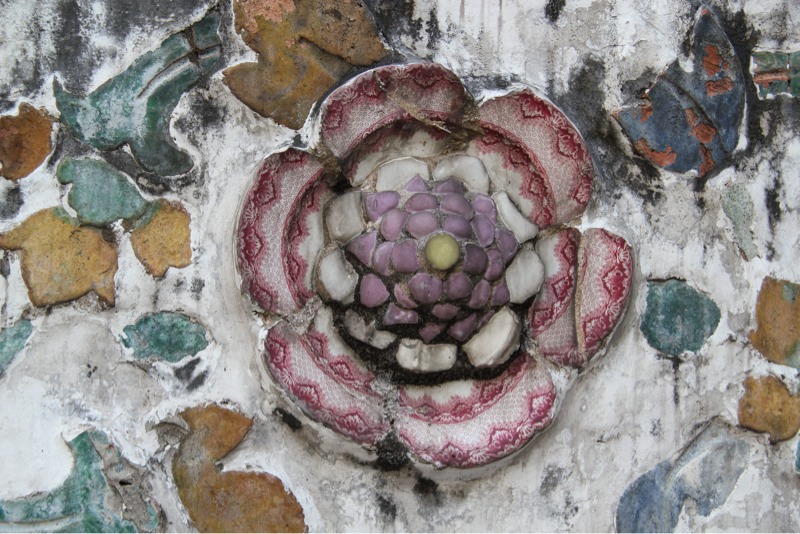 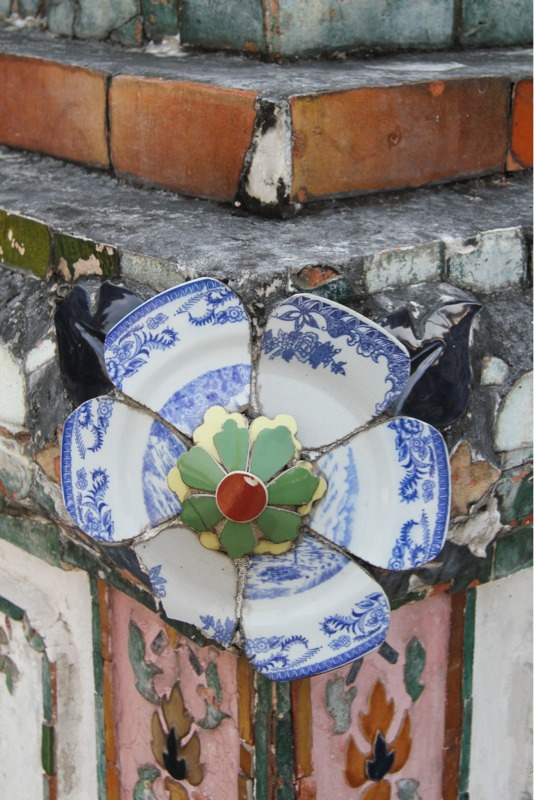 The Grand Palace is the must see destination in Bangkok. It’s a little overwhelming when you first see it, a visual overload of colors and shapes. 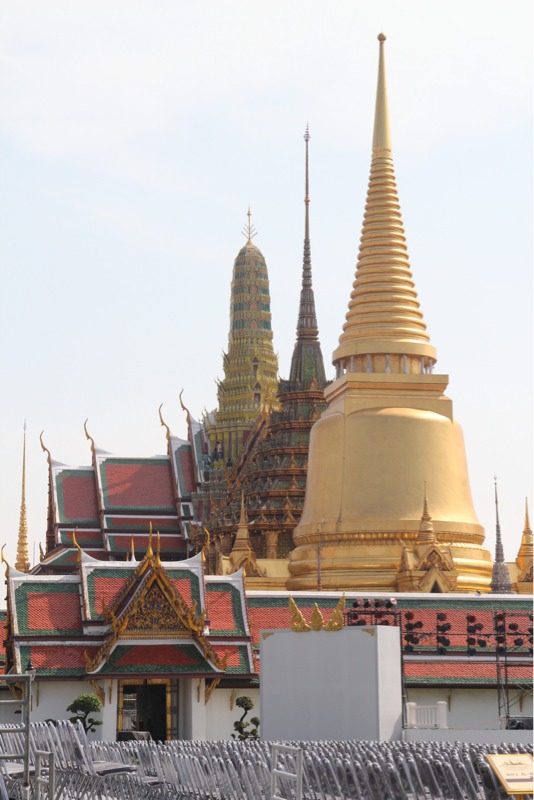 Temples at the Grand Palace. 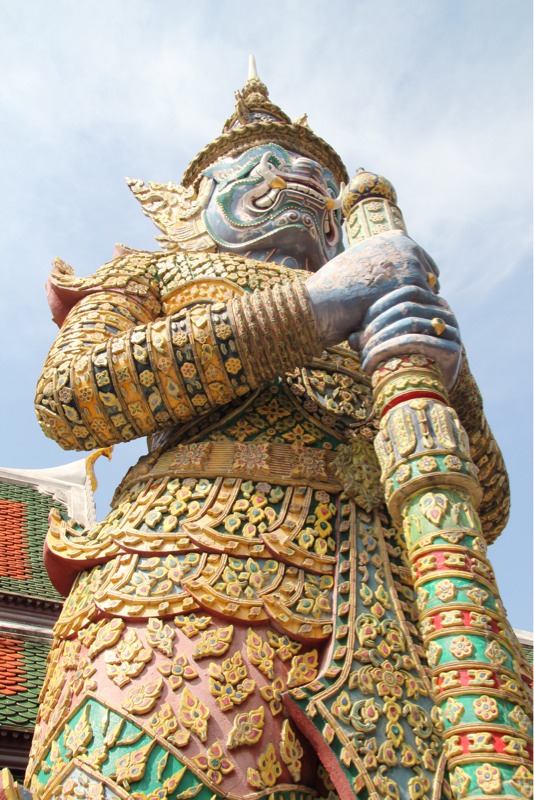 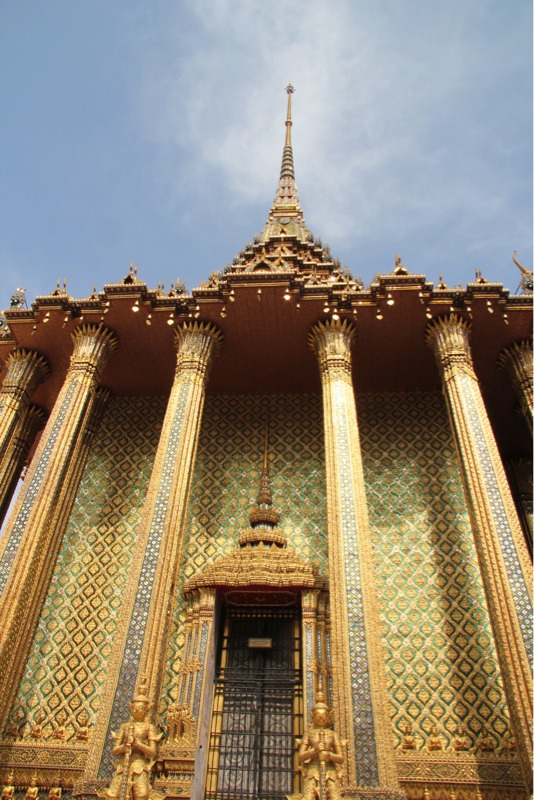 Closeup of a temple. 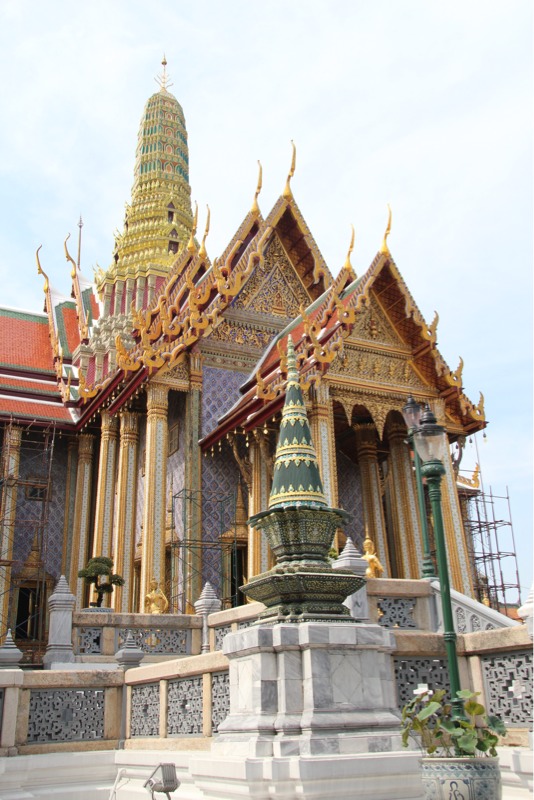 This is just a taste. Unfortunately with sporadic and slow Internet it’s hard to get pictures uploaded.
December 22, 2010 by morris
Uncategorized

Besides getting there, the one other thing you have to look forward to on an airplane is being fed. The whole process of serving food and eating helps make the time pass more quickly

For dinner, I had the beef. While not visually attractive, it actually tasted pretty good. It was an Asian style dish with a black bean sauce.

The three pieces of shrimp in the cocktail were also good. I wonder how much thought went into choosing three shrimp as the appropriate number for an airplane shrimp cocktail. Maybe that’s all the shrimp that one packet of cocktail sauce can cover. The rest of the tray was pretty mediocre.

Salad: lettuce and one tomato. I only ate it because that’s probably the only vegetable that I’m going to see on this flight.

Bread: dry and flavorless. Pretty much just a deliver vehicle for butter.

Dessert: a cross between the worst parts of a cookie and a brownie. Seems designed solely for the purpose of leaving crumbs everywhere.

It’s dark now, but I can’t sleep. Even Eat, Pray, Love isn’t putting me to sleep as I thought it would.

Breakfast is going to be a long night away if I can’t get to sleep.

Delayed by a snow bank

Our flight out of Minneapolis got of to a slow start because of snow. Not falling snow, but a pile of snow. Our plane was a little late leaving the gate because of several minor issues. The pilot said that we could make up for the delay in the air.

The plane taxied for a short distance and then came to a sudden halt. The pilot came in and told us that if we looked out the left window, the outermost engine was in danger of hitting a snow bank if went forward.

The snow removal crews had left a snow pile that was too high for the very large 747 engine to clear. We were the first 747 to fly out today so they didn’t know that there was a problem until now.

The captain said that a tug would be sent out shortly to push us to a wider taxiway.

Because we were on an active taxiway, we had to stay seated with our seat backs up and no electronic devices. I ended up falling asleep. One of those uncomfortable ones where your head keeps bouncing up and down waking you up. Every time I woke up I’d look out the window and see the engine and the snow bank and know that we hadn’t moved.

After a total of two hours of waiting a tug pulled up to the front of the plane and pushed us to the larger taxiway. That’s two hours to spend in cramped coach seats and being no closer to out destination.

After the tug released us, we were finally on out way. As the plane made our final turning the taxiway to the runway, the speed quickened and the engines let out a deep throaty roar. It’s been a few years since I’ve been on a 747. I’ve gotten used to flying smaller regional jets that the airlines seem so fond of. And their engines produce more of a whine than anything else. I’ve forgotten the sheer guttural sound of the 747 as we powered into the sky. I’m near the very back of the plane so every little vibration seems exaggerated. Over the years I’ve been progressively less comfortable with turbulence and I’m not really sure why.

Our flight is taking us over Canada, Alaska, and then Russia before entering Japan. The captain mentioned that we’d be spending about two hours in Russian airspace. I guess the captain thought we’d be interested in the fact that we’d be flying in an airspace that once would get you shot down.

Unfortunately with the delay, we’re now due in around 6:12 pm Japan time which is 5 minutes after our flight to Bangkok is supposed to leave. Delta has about 11 hours to figure out if we’re going to make our next flight or be spending a night in Tokyo.

Well, we made it to Tokyo and whether by plan or convenience our Bangkok flight was delayed 45 minutes. By the time we made it to the gate we could hear our names being called out for boarding.

As I’m writing we’re approaching Bangkok arriving at 11:45pm Sunday night. Temperature outside is expected to be a balmy 85 degrees.

The journey to Thailand has begun The journey to Thailand has begun. First a quick stop in snowy and cold Minneapolis. It’s a chilly 10 degrees outside. We’ll be here for an hour before heading on to Tokyo, Japan.

Our first snafu. I had booked this flight months ago with my girlfriend and my seats together. However, now our boarding passes have us really far apart with both of us in middle seats. Not much use for trying to trade seats. Here’s the seat in front of me. Note the complete lack of any type of entertainment system. Thanks Delta for having one of the oldest fleets on the planet. Good thing I’m well equipped for self entertainment with my iPhone and iPad. Still, it’s going to be a long flight. Here’s the view of the screen from my seat. I’m going to enjoy watching Salt from the equivalent of a 13 inch TV. Mmmm. Beef. I know it’s airplane food but it actually sounds good. We shall see if it’s worth the anticipation.
December 18, 2010 by morris
Uncategorized

When Phoenix Coyotes No. 1 netminder Ilya Bryzgalov came down with the flu shortly before facing New York at Madison Square Garden, the team didn’t have time to call up a goalie from the minors. Coyotes head of pro scouting Frank Effinger scoured the area for an amateur goalie and came up with Fenton, who lives in Purchase, N.Y., and coaches hockey at Manhattanville College. Effinger lives in the same area.

It’s an amazing story, being an NHL player for a night.

We have a new frontrunner for the most redundant book title of 2010 award: Wiley’s FarmVille for Dummies, available for pre-order on Amazon now.

I’m headed to Thailand for the next several weeks and so I’ve been looking for an easy way to blog from my iPhone or iPad.  I am using Movable Type which these days doesn’t seem to have as much support as WordPress so the options are more limited.  I can access Movable Type admin pages through Safari, but I found that it did not really work well at all.

The first thing I tried is a Movable Type plugin called iMT.  iMT is simple to install and creates an iPhone formatted admin page.  The interface is nice, but of limited functionality.  You can’t add photos to your entry.

Flickr provides an easy solution to this with its blog integration. By linking your blog to Flickr, you get an email address where you can send pictures that Flickr automatically converts into a blog entry.  The subject becomes the title and the body and picture becomes your entry.  It worked great, but is designed for single photo entries.  If you send multiple pictures in the same email you get multiple entries.  One for each picture.

I found my solution with the iPhone/iPad App BlogPress.  BlogPress has everything that I need to moblie blog.  I like it because there’s an offline mode where you can write your entry and then upload it when you have an internet connection.  Photos are easy to add to your entry.  Simply select them from your album and they appear in your entry.  When you’re finished, the photos are automatically uploaded to your site, Flickr, or Picasa, and are embedded into your entry.

It will even upload videos to YouTube for incorporation into your blog.

I only tested BlogPress with Movable Type, but it works with all the major content management systems out there.

I highly recommend BlogPress and I know that it will change how I blog on the move.

One Chinese supplier here became so adept at making a 10-ton steel frame that keeps a wind turbine’s gearbox and generator aligned even under gale-force conditions, and making it so cheaply, that the Spanish company now ships the Chinese frame halfway around the world for turbines that Gamesa assembles at its American plant in Fairless Hills, Pa. Mr. Calvet said the American manufacturing sector had been so weakened in recent decades that for some components there were no American machinery companies readily available.

The Chinese have protected their companies by requiring a percentage of local content.  The U.S. has no such requirement.

How many things can we no longer make in the United States even if we wanted to?