The Field Painter via ObamaArtReport 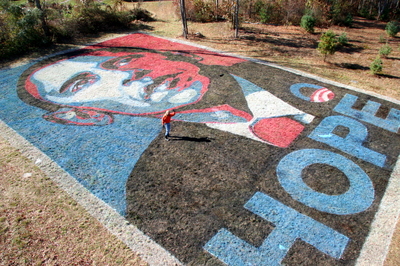 Read about how this amazing field painting came together! (scroll down)

From TheHuffingtonpost.com: Obama Marriage Body Language: One Aspect We Should All Emulate (PHOTOS)

In an earlier post we commented on positive aspects of the relationship between Michelle and Barack Obama. Fresh from having watched their recent 60 Minutes interview, we’d like to bring to your attention one remarkable bit of body language we can all learn from. Specifically, if you watch their body language carefully, you’ll see that Michelle and Barack communicate with each other in a way that is rare among presidential couples: when Michelle Obama is speaking, Barack makes eye contact with her and listens with interest to what she’s saying.

If you want to see just how rare that is, look at old footage of interviews with Laura and George Bush, Bill and Hillary Clinton and the elder Bushes. Go back a little further and look at footage of Nancy and Ronald Reagan, Pat and Richard Nixon and any others you can find. Here’s what you usually WON’T see: the President looking at his wife when she’s speaking. You’ll see lots of footage of presidential wives listening, usually with an adoring smile locked firmly in place, to their husbands, but it’s rare to see it the other way around. When Michelle Obama is speaking, though, Barack looks at her and listens. When he’s speaking, she looks and listens. It’s a refreshing exception, and a key to the respect that flows between them.

Victoria’s Secret angel Karolina Kurkova surprised onlookers with her almost invisible bellybutton at last week’s show in Miami, but there is an explanation.

“She had an operation when she was an infant,” her rep told the Daily News. “It’s a fact and just thank God she’s healthy.”
…
So what belly button condition could baby Kurkova have had?

Doctors say it was likely an umbilical hernia.

All I know is if I’m looking at Karolina Kurkova, I’m not looking for her belly button. 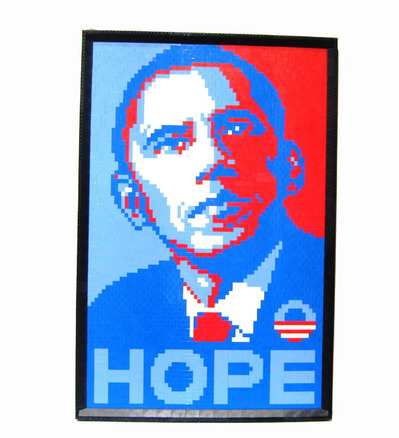 Buy the “Legobama” on eBay.  Made of $500 worth of Legos.  The artist also does custom portraits.

Just received from the Barack Obama website the small Shepard Fairey, Obama Vote Poster.  For those of you wishing that it was another print, it isn’t.  It’s an unsigned, unnumbered poster. The paper is much thinner and smoother than the prints.  But overall it looks good!

The poster is currently sold out on the site.

Mine came in the same type of gigantic indestructible shipping tube that were used for my previous prints. 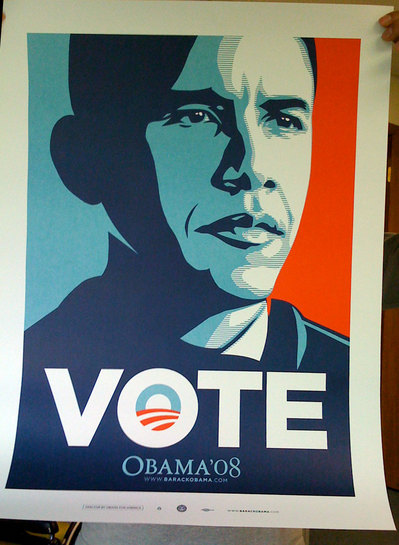 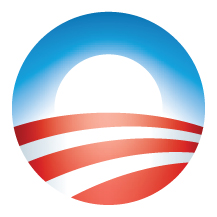 From NYTimes.com: The “O” in Obama

Q: I have to ask, since many agencies that do political campaigns are simply “doing a job,” did you have strong feelings one way or the other for the Obama candidacy?

A: We were excited to work on the logo and energized by the prospect of Mr. Obama’s campaign. However, we didn’t pursue or develop the work because we were motivated exclusively by ideology. It was an opportunity to do breakthrough work at the right time in what’s become a predictable graphic landscape.

The Obama logo is a brilliant piece of artwork and an extremely important part in the branding of Barack Obama as “cool”, especially to younger voters.

Most political designs before this were generally generic patriotic symbols incorporated with a name.  The “O” logo does so much more, capturing the essence of Barack Obama’s campaign, HOPE.

Just in time for Christmas! Frighten your African-American neighbors with this 5.5 foot tall “burning cross”.  The 210 LED bulbs simulate fire without the danger of burning the house down.  Panic not included.

Buy the cross at the American Family Association.

I found this photograph that I had taken but forgotten to blog about.  Here was the McCain Victory HQ in Cincinnati. 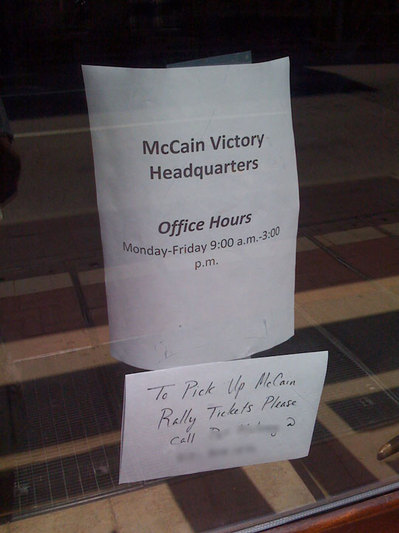 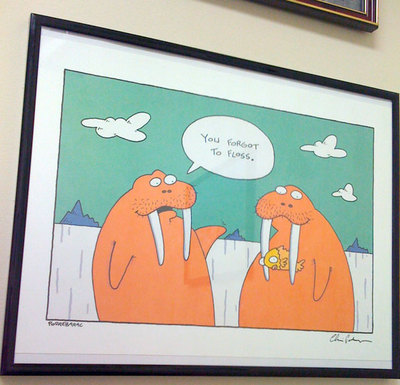 Went to my dentist this morning for a cleaning.  Dentist offices always have subtle reminders to floss daily!  I think this happened to me once.