McCain and the Underwear Gnomes

From NYTimes.com: McCain: Troops May Be Home by 2013

Reading the text of McCain’s speech, I’m reminded of the South Park episode with the Underwear Gnomes.  The gnomes stole underwear from kids because it was part of the plan shown below. 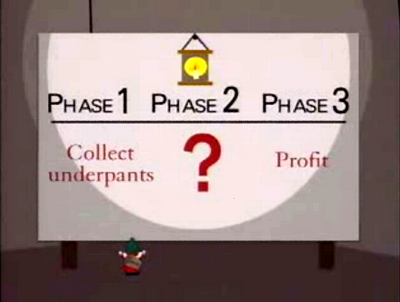 None of the Gnomes knew what Phase 2 was.

McCain in his speech sees a future through his leadership where we’ve:

And a lot, lot more.

To me, it fits the Gnome plan as follows:

Lots of nice Phase 3 stuff here.  But is there a Phase 2?  It’s clear in the Bush Administration, there was no Phase 2.  I’m not certain if McCain has a realistic Phase 2 either, especially for Iraq.  Or Inflation, or reducing obesity in kids.

I know it’s the nature of politics that we’re voting more for the person than a concrete plan.  All the candidates have lacked specificity in their Phase 2, especially for Iraq.  I just am extremely skeptical about anyone claiming that we can somehow “win” the war in Iraq in the traditional sense that McCain is claiming that we’ll be able to do in 5 short years.