All this week I’m writing about Battlestar Galactica, the best show that most people have never seen.  The premiere of season 4, the final season is this Friday April 4th at 10:00PM on SciFi Channel.

There are so many interesting characters to choose from.  Battlestar Galactica has spent a tremendous amount of time developing characters and showing their many different sides.   But my favorite character has to be one of the most tragic of them all.  Colonel Saul Tigh. 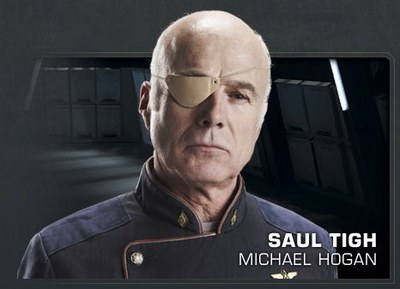 Those are words that describe the tragic character of Colonel Saul Tigh.  In the Season 3 finale, Tigh learns that he’s one of the final five Cylons models.  This after a long career of hating and fighting the Cylons.  Tigh as the leader of the resistance on New Caprica, is physically tortured and loses his eye.  He then executes/poisons his beloved wife as a penalty for collaborating with the Cylons after she gives information to the Cylons to free him.

My two favorite Tigh scenes:
1. In the hanger deck, Tigh after leading the resistance on New Caprica, with all his losses and sacrifices, hearing the chant of “Adama, Adama” after the Galactica jumps back to rescue them. Tigh sacrificed nearly everything for the resistance while Adama and the Galactica jumped away to safety, but Adama gets heroic welcome as the savior.  The look in the face of Tigh as the broken old man said it all.

2. When Tigh is revealed as a Cylon.

The quote itself doesn’t do this scene justice.

I’m a little sad that Tigh has been revealed as a Cylon.  I was afraid that it might be one of those “jump the shark” moments.  But, I trust in Ron Moore’s vision of Battlestar Galactica and I am looking forward to seeing what happens as the show concludes.

UPDATE
From NYMag: Michael Hogan on Playing Tigh on ‘Battlestar,’ Hating Cylons, and Hearing Music in His Head

Barack Obama Rally at University of Cincinnati on Sunday Night