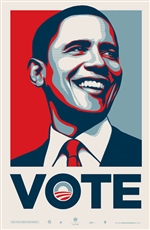 It was a creed written into the founding documents that declared the destiny of a nation: Yes, we can.

It was whispered by slaves and abolitionists as they blazed a trail towards freedom through the darkest of nights: Yes, we can.

It
was sung by immigrants as they struck out from distant shores and
pioneers who pushed westward against an unforgiving wilderness: Yes, we
can.

It
was the call of workers who organized, women who reached for the
ballot, a president who chose the moon as our new frontier, and a king
who took us to the mountaintop and pointed the way to the promised
land: Yes, we can, to justice and equality.

And
so, tomorrow, as we take the campaign south and west, as we learn that
the struggles of the textile workers in Spartanburg are not so
different than the plight of the dishwasher in Las Vegas, that the
hopes of the little girl who goes to the crumbling school in Dillon are
the same as the dreams of the boy who learns on the streets of L.A., we
will remember that there is something happening in America, that we are
not as divided as our politics suggest, that we are one people, we are
one nation.

And,
together, we will begin the next great chapter in the American story,
with three words that will ring from coast to coast, from sea to
shining sea: Yes, we can.

These words have inspired me since the day Barack Obama uttered these words after his primary loss in New Hampshire.  In the face of the defeat in the nascent primary campaign, Barack Obama chose this opportunity to rise above the occasion and to inspire millions of people and rally them to his cause.

Since September 11, 2001, our country has been ruled by fear.  Fear of our neighbor, fear of the unknown, fear of change, fear of everything.

Barack Obama represents hope instead of fear. A hope that we can be a people that can transcend race and religion.  That through hard work that more Americans can live the American Dream.

It’s this American Dream that drew my parents to these shores nearly 40 years ago.  America was the beacon of light, a land of opportunity and a place of freedom for political expression.

This is an America for all Americans.  Today we can take one small step forward to a better tomorrow.  Yes we can.