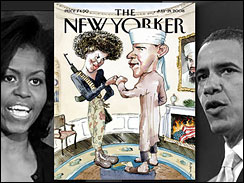 Barack Obama’s campaign is condemning as “tasteless and offensive” a New Yorker magazine cover that depicts Obama in a turban, fist-bumping his gun-slinging wife.

An American flag burns in their fireplace.

The New Yorker says it’s satire. It certainly will be candy for cable news.

From later in the article:

The magazine explains at the start of its news release previewing the issue: “On the cover of the July 21, 2008, issue of The New Yorker, in ‘The Politics of Fear,’ artist Barry Blitt satirizes the use of scare tactics and misinformation in the presidential election to derail Barack Obama’s campaign.”

From Wikipedia’s definition of satire:

Although satire is usually meant to be funny, the purpose of satire is
not primarily humor in itself so much as an attack on something of
which the author strongly disapproves, using the weapon of wit.

This cover really doesn’t seem like it fits the definition of satire to me.  Where’s the wit?  Where’s the attack on something the artist strongly disapproves of?  It shows the summary of scare tactics that are being used against Obama but it seems to validate them instead of disapproving them.  It looks like the artist is actually saying that this is what will happen if you vote Obama into the White House.