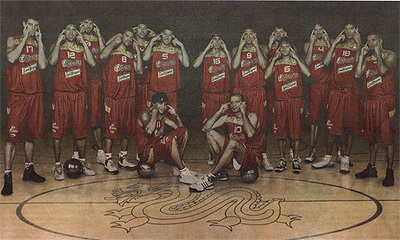 Spain’s Olympic basketball teams have risked upsetting their Chinese hosts by posing for a pre-Games advert making slit-eyed gestures. The advert for a courier company, which is an official sponsor of the Spanish Basketball Federation, occupied a full page in the sports daily Marca, the country’s best-selling newspaper.

Ah, this brings up some not so fond memories of my youth growing up Asian in the United States.  I can tell you one thing from the experience, the pulling of your eyes into a slant isn’t a universal sign of friendship or goodwill.