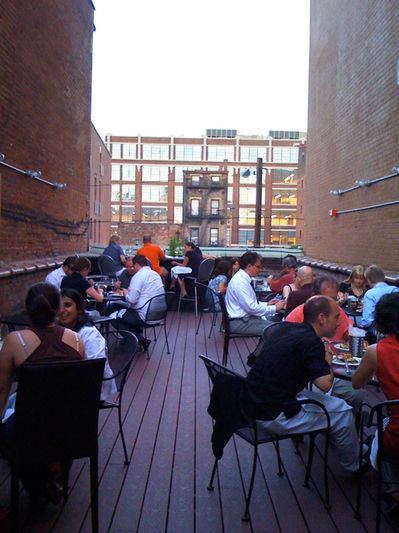 Cincinnati E.A.T.S. is a new group that supports independent restaurants by “taking over” a restaurant for a cocktails and a fixed price menu.  Last night was the first event at Lavomatic Cafe in the Gateway Quarter of Over the Rhine.

Last night’s event was a sellout and the place was packed.  It wasn’t as conducive to meeting people as I thought it might be, as people seemed to clump up in groups with people they already knew.  I ran into some acquaintances that I knew, but hadn’t had an opportunity to really speak to, so that made for some ready made dinner companions.  We were joined by one of the organizers and ended up meeting some people in the tables surrounding us.

The conversation was good, but the dinner itself, not as good.  I know that judging the quality of a restaurant when food is mass-produced is not really fair, but I did pay for it.  I felt that the food was pretty mediocre.  The main entree was Amish chicken with zucchini, kalamata olives, and house-made harissa.  The “harissa” is to hard to describe, sort of like a Taro cake that you would get a dim sum.  That was excellent, but the chicken was bland.  We felt a little bad asking for some salt and pepper which was not on the table.  I was thankful that I didn’t get the other entree, the Warm farro with carrot, asparagus, and citrus (Vegan).  Farro’s a wheat.  Hopefully, a filling wheat since there was only a small portion of it with three or four asparagus on the side.  That’s one of those entrees where the dessert needs to be a Big Mac.

I have previously been to Lavomatic once before, but the dish that I got that time was just fair also.  Nothing really special.   I really do want Lavomatic to succeed since it’s the first restaurant in the Gateway Quarter.  If it succeeds, it’ll lead to more restaurants opening in the area.  The restaurant is a beautiful place and a great environment for dinner so I will definitely try it again.  Hopefully, I’ll find something there that I really like.  Any suggestions?

Hats off to Cincinnati E.A.T.S. for putting on an event like this.  It was a fun time and it definitely exposed a lot of people to Lavomatic.  Hopefully, the people will be back and try it again in a more normal dining situation.